A variety of amazing birds to be seen!

Birdlife
There are many varieties of sea birds including the rare Yellow- eyed Penguin and little Blue Penguins. Forest-dwelling birds include abundant Tui, Bellbird, Fantail, Tomtit, Brown Creeper and native Pigeon as well as the rare Mohua.

Visit Where to See to find out where you can see some of the birds in The Catlins.

Visit the Yellow-eyed Penguin page to find out about these very special birds.

Little Blue Penguin
Little Blue Penguins can be found all along The Catlins coast where they nest in caves and burrows. These birds, the smallest of the world’s penguins, fish during the day close to the shore and can sometimes be seen from headlands. Little Blue Penguins come ashore after dark and go out before dawn so are difficult to see on land. They are the same species as the fairy penguin that is found in Australia.

There are also some rare native bush birds such as Kakariki (Parakeet), Kaka, Titipounamu (Rifleman), Karearea (Falcon). A particularly significant bird is the Mohua (Yellowhead) which is now found only in southern South Island Forests, in The Catlins it is to be seen in the Beech forest only, especially along The Catlins river.

Birds of the open country
On the western and northern borders of The Catlins’ forests, the drier and colder climate limits tree growth and the forests give way naturally to shrubland and tussock grassland where native birds other than New Zealand pipit and hawk are rare and introduced birds such as Red Poll, Chaffinch, Yellow Hammer, Blackbird and Thrush Dominate.

Birds of the Estuaries and the Sea
The estuaries of The Catlins are rich in bird life. Wading birds commonly seen are Kaki (Stilt), Torea (Oystercatcher – 2 species), Herons (2 species), Tuturiwhatu (Dotterel), Plovers, Kuaka (Godwit) as well as Gulls, Tara (Tern – 2 species), at least 3 species of duck, and Kotare (Kingfisher).

Other sea birds to look out for include Shags, Sooty Shearwaters and Crested Royal Spoonbills.

A field guide to the birds of The Catlins produced by the Forest and Bird Society is available at the Owaka Visitor Centre. 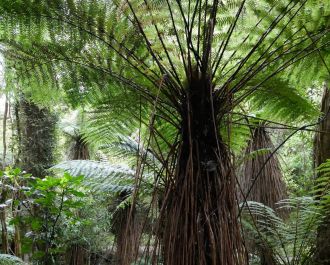